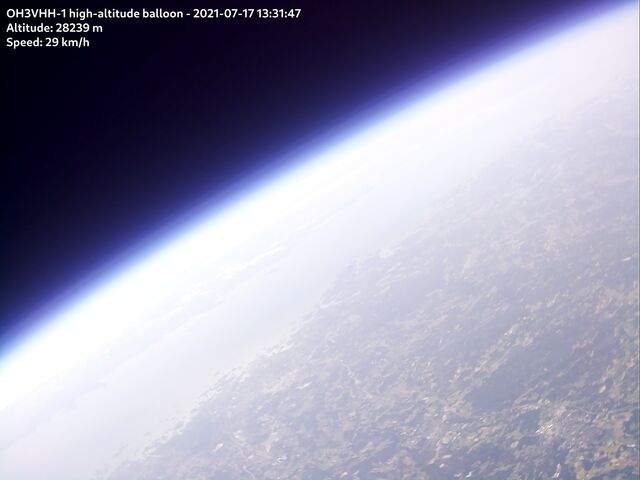 The OH3VHH-1 high-altitude balloon flight was a success: the balloon launch was smooth and tracking of the balloon worked mostly without glitches. This post consists mainly of photos, telling the story of the flight from the launch site to the payload recovery. These photos include a large set of high-resolution images from upper atmosphere taken by the Raspberry Pi tracker hardware in the balloon payload.

See the main page for OH3VHH flight for detailed information about the flight hardware and about the radio transmissions emitted by the payload.

See highlights from the flight on the following video clip:

There is also a longer version of the video, including the flight preparations:

Additionally, you can still watch the full YouTube live stream from launch site!

We started preparations at the launch site around 06:00 UTC on Saturday, July 17th, which was the primary planned launch time for the flight. The weather forecast for the day was excellent: sunny, no clouds, temperature rising up to 27C and wind speed of 1-2 m/s near ground level.

Some quick facts about the flight:

We used the CUSF Landing Predictor extensively throughout the week before the launch to follow how the weather conditions developed. The predicted flight path we got on Monday (5 days before launch) was only slightly off from the final prediction on the launch day, which was indeed very impressive.

However, as we got closer to the launch day, the wind direction in the upper atmosphere (between altitudes of 10 and 20 kilometers) shifted slightly towards north, which could make the balloon land on an area with several large lakes. This was obviously something we would like to avoid, so that we could safely recover the balloon payload hardware.

We even considered using an alternate launch site some 20 kilometers south from Hämeenlinna, but eventually ended up with a plan to fill up the balloon with slightly more hydrogen. This would increase the balloon ascent rate from the original plan of 5 m/s to over 7 m/s so that the balloon would simply rise up and burst sooner and avoid the areas with lakes. Our plan to use a higher ascent rate worked perfectly and even the maximum altitude of 28.3 kilometers was higher than the estimate burst altitude of 27 kilometers!

While APRS on the 2-meter band (144.800 MHz) was the main method of tracking the balloon, we only had a 70cm APRS IGate / receiver. This is because we have a very good APRS repeater and IGate coverage in Southern Finland that basically eliminates the need to set up your own receivers. During balloon descent, the last balloon position reports that reached the aprs.fi service had an altitude of under 300 meters, which confirms the APRS coverage.

The APRS tracker on the 70cm band (432.500 MHz), based on a Vaisala RS41 radiosonde, had quite a lot of issues with inaccurate GPS position information in high altitudes of over 10 kilometers. We do not yet know the exact reason for this, although we suspect it could be a result of some configuration setting for the RS41 GPS chip. After all, the firmware we used in the radiosonde had never been tested in high altitudes. Alternatively, the RF transmissions from other trackers could have interfered with the radiosonde GPS receiver.

The LoRa tracker was our backup tracker that we could use in case both of the APRS trackers failed for some reason. The Embedded Radio Tracker software, running on a Raspberry Pi model A+, also handled recording of sensor data and taking of still photographs using the Raspberry Pi HQ camera.

The LoRa modulation performs particularly well in low signal strength scenarios, such as the low-power transmitter in the balloon payload. The map below indicates the RSSI reading for calculated successfully received LoRa packets. The receiver antenna was a simple Diamond AZ-510 dual-band VHF/UHF whip mounted on top of car roof with a magnetic mount.

The LoRa receiver was located at the launch site all the time until the balloon landed. Before losing reception, the last LoRa RSSI readings dropped well below -120 dBm when the payload was over 50 km away and its altitude was below 5 kilometers during landing.

The DVB-S1 live video reception at the launch site worked really well considering this was the first time ever we had used such transmitter on a flight. The video reception was intermittent at times when the payload was spinning and swinging more heavily because of wind, but we did get really smooth video playback during the launch and even from altitudes near 20 kilometers where the wind speed was quite low.

Photos of the launch and the flight

Filling up the balloon

Photos from the flight

In spite of some challenges during the launch, most things went really smoothly. And most importantly, the payload did not end up landing on a lake! We had a great launch day and awesome weather. Much fun was had! :)

We did have issues with both APRS trackers: 2m Trackuino had trouble getting GPS fix near ground and 70cm RS41 had GPS issues in high altitudes, which was totally unexpected. We still don’t know what the reason could be — maybe some kind of misconfiguration of the GPS chip or possibly RF interference from other tracker transmissions?

The DVB-S live video transmission from the balloon (along with the YouTube stream) was a unique feature that got many people interested in following the flight — even though we had only a couple of people attempting to receive the DVB-S signal eventually. Sharing instructions earlier for setting up reception could have helped to gather a wider audience.

YouTube live-streaming of the launch event was a success with over 200 viewers watching the stream simultaneously and an active discussion going on in the chat. Admittedly, we could have done our commentary in a slightly more organized way. :)

Finally, launch preparations took a lot longer than planned, as we had to carefully switch on all tracker devices and cameras before closing lid of the payload enclosure — just to make sure we won’t miss anything like potentially forgetting to enable recording of video or lose the payload because of tracker not being powered on! This was a real challenge especially with the video cameras, which require access to all of the buttons around the camera enclosure. Additionally, the uncertainty with the Trackuino 2m APRS tracker GPS fix caused some delays.

Huge thanks to both Jari OH3UW and Sami OH3EYZ for working on this project with me. Additionally, I want to thank all people involved in the launch, and more specifically Henri OH3JR for offering his help with the balloon launch and Seppo OH7Z for getting us computer accessories to fix our YouTube streaming setup!

NOTE: We will be publishing videos from the flight in the coming days!

See the main page for OH3VHH flight for detailed information about the flight hardware and about the radio transmissions emitted by the payload.